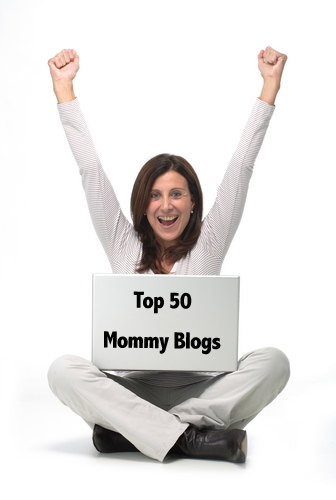 Don’t be fooled by the pastel color scheme. Melinda Roberts is a mom to be reckoned with. She recently published her book Mommy Confidential: Adventures from the Wonderbelly of Motherhood (available at Amazon.com).

From the site: Witty, sarcastic, and always engaging, Mindy chronicles her life, and that of her children. She tackles the good and the bad with a broad stroke and a sense of humor that give her writing depth and an emotional pull.

Her husband set up a blog for her as a gift for her 32nd birthday and she’s taken the cyber ball and run with it!

A mommy blog about her daily flashes of brilliance (or, at least, highly glossed) regarding parenting.

A 39-year-old working mom to two girls trying to stay sane and away from the Barbie PopTarts. BlondeMomBlog is the No. 1 Google search result for “mom blog.”

A 29-year-old mother to a lively 18 month old girl with a B.A. degree in Sociology. She works with at-risk families to teach them about child development and how to deal with the challenges of parenthood.

Forty-year-old South African mother to twins began blogging as a way to cope with infertility. Now that she’s been blessed with a set of boy/girl twins, she chronicles her daily adventures with them.

What better name for a blog written by a group of women mothering Korean American kids than Kimchi Mamas? They’re a little spicy, plenty fiery, and sometimes? They like to get pickled.

Kim Moldofsky is a former dolphin trainer, corporate creativity trainer, and a potty trainer. Now she writes, blogs, consults on blog outreach, and does all matter of mom-things.

Each day on the Writing Mamas Daily Blog, a different member writes about mothering.

Written by a woman called “Y” who is addicted to Starbucks, reality TV and to getting really good deals through coupons and “club member” savings.

Anything’s game. Getting offended is a possibility. Laughing is required.

Liz is a writer and former ad-woman who is completely honest about her lack of experience in motherhood.

A Mommy Blog written by a Daddy! Mark Brady, PhD is a father and social neuroscience educator. He’s also an award-winning author and the co-founder of the Children’s Grief Program in Palo Alto, California.

19. Play Groups Are No Place For Children (http://playgroupsarenoplaceforchildren.com/)

Jennifer is a thiry-ish mom, wife, former Speech-Pathologist, worry wart, bossaholic, control freak. Her claim to fame is that she’s the #1 search result on Google for “kids pooping in pools!!”

20. Mom To The Screaming Masses (http://momtothescreamingmasses.typepad.com/)

WANTED, Carmen, mom to the Masses, for dangerous undertakings inside and outside the home. Last seen with her partner The Hubster, and six accomplices. This fugitive is considered armed (with epi pens and inhalers) and dangerous, especially when she hasn’t had her morning coffee.

Julie Hudson is smart, funny, and has a first grader who’s destined for a career as a lawyer, a preschooler who can scream loud enough to shatter glass, a baby who’s already eating her out of house and home, and a husband who can drink his weight in Natty Light. She’s also inordinately concerned about the cleanliness of her kitchen floor.

She does the best she can. When she feels like it.

She blogs to keep her head above water and her a$$ out of a psychiatric hospital! And because if she don’t tell her story, no one else will.

The 14th Reincarnation of the Imperfect Woman. Dawn is a graduate student and adopted mommy to an Ethiopian born baby boy.

Working moms everywhere will hear themselves in the voices of Erin and Kristin, creators and hosts of Manic Mommies, the weekly podcast for moms trying to do it all!

Katie is a blogger who likes new things, loves old things, and admits to being slightly unstable.

28. Three Boys Under My Roof (http://3boysundermyroof.blogspot.com/)

Heather is a wife and mother of two boys. She has a second job as an engineer that isn’t as fun as the wife/mother gig, but it brings home the bacon.

Sarah Porter writes a blog that she describes as an “imaginary binky.” That is, it soothes her as she furiously types out some diatribe about her life and family.

Written by freelance writer and author Rebecca Woolf, she blogs about motherhood from Los Angeles, California.

31. Notes From the Trenches (http://www.notesfromthetrenches.com/)

Chris Jodran began blogging at Notes From the Trenches in 2004, never expecting more than a handful of people to ever read it. And half expecting that she would have to bribe even those few souls. Slowly her blog developed a following and has been nominated for several blog awards over the years.

This Full House is a full-frontal encounter into Liz’s life as a SAHM, lover of multi-functional gadgets, slayer of ALL appliances proved slow and/or inefficient, with 4 children, 2 cats, 1 super hyper sock-eating chocolate lab and 2 damned much laundry.

In August of 2007 Jody and her husband uprooted their family from the little town they loved and moved to the beach. They bought a 31 foot sailboat and now spend most of their free time torturing the kids by forcing them to cruise in what basically amounts to paradise.

Failing at keeping expletives to a minimum while raising two live children, and trying to come to terms with the death of The Other One. She has an itty bitty obsession with food. In a good way.

37. Whiskey In My Sippy Cup (http://www.whiskeyinmysippycup.com/)

She writes about how her momma didn’t love her, plays Food Network, and hilariously recounts her daily adventures as a mom in Colorado.

A sister, a daughter, a wife, a mother, an employee, a computer addict, a freelance designer, a nag, a bitch, and yet oh! so! humorous.

Who is Crunchy Carpets is a Vancouver, B.C. mom with two insane children, and a Crunchy Husband she’s been married to for nine years.

During the day she bosses around men that are old enough to be her father. At home, she gets bossed around by a four year old boy who refuses to wear pants. It’s all in a day’s work. Who’s the Boss? Momma is, that’s who.

Jen is a mom and a freelance corporate writer who talks about everything a work-at-home-mom can relate to.

Mandy started writing Mommy Cracked in October 2007 as a creative outlet while being a stay at home mom. She quickly learned that blogging is a great way to connect with like-minded others, offered heran opportunity to write and served as an online diary of sorts about her ife, memories, and experiences.

Student, feminist, mother to four, and founder of Hippymom.com; Melia Lore chronicles her adventures as she attempts to juggle her family and several online businesses.

Despite her struggles with infertility, Sandi and her husband have grown their family through both medical treatments and adoption. They have three princesses and a new little boy recently adopted from Ethiopia. The action never ends at the Brown House.

Neila left Corporate America four years ago to be a stay-at-home mom. It is the most rewarding, fulfilling, and frustrating job she’s ever had. She started a blog because she has a serious lack of adult interaction.

Joanne Bamberger is also known as PunditMom, a politically progressive mom AND political analyst living in the shadow of the nation’s capital. PunditMom blog is a mother’s guide to politics and a place for women to get their political fix and discuss their political ideas.

“Where Dirt Meets the Skirt.” Tanis Miller dreams of world domination while blogging in Canada. She and her family are also supporters of several charities.

Stefania Pomponi Butler, founder and owner of the CityMama™ blog, is proud mother; and a professional writer and blog editor/producer who covers style, food, pop culture, and (of course) parenting with a cheeky twist. She often speaks on blog-related topics.

There is an unwritten law amongst Guinness World Records staff that they do not take part in any record attempts. They instead remain separate from the action and simply observe. Never has this rule been more sorely tested than on the morning of March 30, 2010, when Australian GWR judge Chris Sheedy attended an attempt on the largest simultaneous massage.

The location could not have been more perfect. The lucky massage recipients were laid out in a grid formation on a grassed area of the stunning Lavandula Lavender Farm in Shepherds Flat in the beautiful area of Daylesford, Australia’s premier spa region. Queues of massage therapists and recipients began forming from 7am, despite the fact that the event itself was not happening for another few hours.

As the sun rose the queues grew longer, and soon it was obvious that the record, which stood at 167 massage therapists and was last broken in Washington D.C., was about to be smashed. As the start of the massage was signalled there were 263 massage therapists rubbing the backs of 263 recipients, and one very envious GWR judge walking amongst the grinning and groaning (in pleasure!) record breakers to ensure nobody paused during the strict five-minute massage period.

In fact the massage in Daylesford lasted for 12 minutes and, judging by the smiles on the faces of participants at the end of the event, the well-trained hands of the therapists had done the required job. The organisers, Tourism Victoria, were thrilled that this special region of the world had been able to show off its many attributes in such a fitting fashion. The therapists were amazed to now be Guinness World Record holders. The recipients were glowing. And Chris Sheedy, despite not having received a massage, still couldn’t help but feel relaxed in such perfect surroundings.